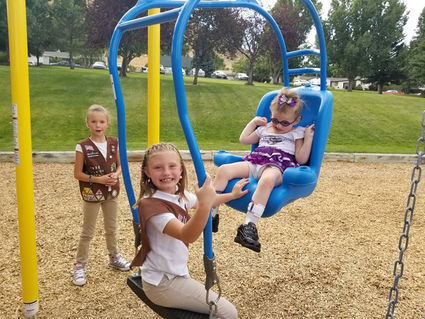 Thanks to a local Girl Scout Troop children with disabilities will have the chance to swing in an expression swing at Collier Park.

Collier Park also known as the Rainbow Park because of its rainbow colored slides, now has a new swing made especially for children with disabilities to enjoy with their parents.

The face-to-face expression swing allows children and their parents to experience what it's like to ride a swing together. The parents ride on one side of the swing facing their child who is sitting on the seat of the swing. For some children with disabilities, this might be the first time they ever had the opportunity to swing.

Jennifer Wilkinson, Girl Scout Troop No. 1932 leader, said all of this was possible due to a project the girls started about a year ago.

Wilkinson recalls how the Scouts were learning the difference between a community-service project and a take action project.

A take-action project is a chance for the Scouts to look at the community, identify a problem, come up with a solution and implement the solution to the problem and keep the solution going.

The girls were all asked to think of something they think the community needs and write it on a piece of paper. After all ideas were submitted, the girls narrowed it down to three choices, Wilkinson said. They then selected the ADA playground equipment as the project.

"We decided to use our cookie money," she said.

Once they knew how they would purchase the equipment, they needed to decide what to type of equipment to get. They searched online for ADA playground equipment and found different options. They then brought the ideas forth at a public meeting, which Wilkinson said was poorly attended. The troop then decided to put a poll online and out of the playground equipment listed, the expression swing received a strong majority of the votes. They also decided to buy and adaptive seat swing with the expression swing.

Then the Girl Scouts approached Parks and Recreation director Brad Raney about the project, which the city was immediately on board with.

The Girl Scouts raised $1,900 through donations and cookie sales, while the city donated $2,300 to pay for the frame that would hold the equipment.

What really helped in the Girl Scouts success with raising the money is the fact that one of their very own Girl Scouts had a sister who has disabilities. After getting permission from the girl and her parents, the Girl Scouts told Kinley Phillips' story when asked why they were raising money for the swing.

Wilkinson said some people were negative and asked how a group of eight and nine year old girls were going to get this project done. They suggested the girls wait until they were older.

"They had an idea. They wanted to do it and there was no stopping it," she said.

She said with Girl Scouts the leaders are taught to listen to the Scouts and follow their lead. If they have an idea, they need to help find a way to achieve it.

After the expression swing was installed, Phillips was on of the first to ride it.

"(It was) the first time she swung on the swings," Wilkinson said. "Her giggles made us cry."

Tears of joy that is to see how happy Phillips was. They knew other children would be just as happy to use it too.

"They were excited. Every kid loves playground equipment," Wilkinson said. "Now they feel like they accomplished something."

It's hard for some to believe that all of this was paid for through cookie sales, but it was. "Even one box of cookies helps a troop," Wilkinson said.