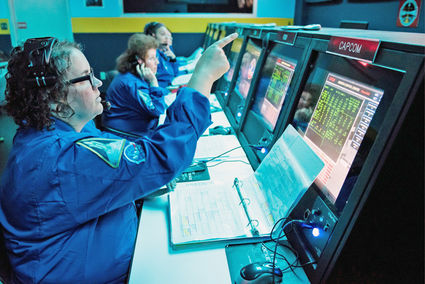 Kathy Stanton takes her duty as CAPCOM very seriously. Stanton was responsible for all communications between the shuttle and mission control.

A teacher's childhood dream became a reality this summer when she attended space camp.

Kathy Stanton, a Green River Science, Technology, Engineering and Math teacher, recently attended the Honeywell Educators at Space Academy, which took place in Huntsville, Ala., at the U.S. Space and Rocket Center.

Stanton said she found out about the camp through her Edmodo account. Edmodo.com is a way for teachers to stay connected with their students and parents. It helps students get and stay organized and it's a way for them to access their assignments and grades.

It was through a post on Edmodo that Stanton learned Honeywell was accepting applications for its weeklong HESA program.

"I've always wanted to go to space camp, so I applied for it," Stanton said.

She said she grew up watching space shows and movies like "SpaceCamp."

Stanton was one of the 200 worldwide who were accepted for the HESA program, which was completely paid for through scholarships.

"When we got there I didn't realize how competitive it was," she said.

Once everyone in the camp were in a room, they were told for every one of them in the room, three who applied didn't make it and are sitting at home.

According to Honeywell's website, while at the camp, teachers completed 45 hours of classes and labs, participated in simulated astronaut training and activities focused on space science and exploration and learned techniques to promote lifelong learning.

She enjoyed the Multi-Axis Trainer, which simulates the disorientation one would feel in a tumble spin during re-entry into the Earth's atmosphere.

"I've always wanted to do that," she said.

Another position Stanton got to try was CAPCOM, which is a capsule communicator at mission control. During her role as CAPCOM, Stanton was responsible for all communications between the shuttle and mission control. She also participated in a simulated mission to Mars on the Orion Spacecraft. They had to land on the surface of Mars, explore it and return back.

That's not all Stanton enjoyed.

"I met so many people from all over the world," she said.

Stanton said her 15-member team was comprised of people from nine different countries. The team was tasked with designing a patch and was given the team name Kibo, a Japanese module on the International Space Station. Kibo means hope, so the word hope is written around the border of the patch in each language represented on the team. The stars in the sky represent the team's students, and their future exploration plans on Mars

"These friendships we made will be around forever," she said.

Most of them exchanged Facebook information so they could keep in touch.

Stanton said she would recommend this program to other teachers, because it is so inspirational and eye opening.

"That's my big take away. NASA need all kinds of people," she said.

She said that's what she wants to take back to the classes she's going to teach. She wants them to know there are other careers in NASA than being an astronaut.

"The kids that I'm teaching now, that's the generation that's going to Mars," she said. 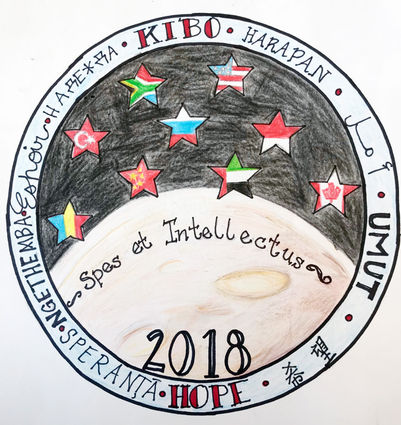 This is the patch Stanton's 15-member team designed while at space amp. The Latin in the middle says hope and understanding.