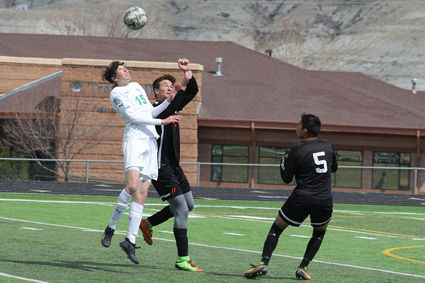 Hayden Counts gets in position as the Wolves dominate Jackson 3-0 Tuesday.

The Green River High School boys soccer team showed they're a force to be reckoned with on the field, earning two more victories and battling a team to a tie during the past week.

The Wolves scored a victory over Natrona County Friday in a match that ended 1-0 in favor of Green River. The next day, they fought a tough Kelly Walsh squad to a 1-1 tie and scoreless overtime, before earning a commanding 3-0 win over Jackson Tuesday afternoon.

Head coach Chris Bieber said he wasn't sure what to expect with either Natrona County team, saying he knew NCHS lost a few key players, but expected a tou...