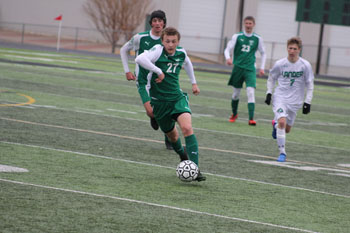 Grant Cobb rushes down the field Saturday as the Wolves took on Lander in the semifinals of the Todd Malonek Southwest Invite Saturday.

Todd Malonek would have been proud.

The Green River High School boys soccer team won the memorial tournament named for the Wolves' assistant coach, defeating Worland at the end of the tournament.

The Wolves and the Warriors would battle to a 1-1 tie during the championship round, resulting in the two teams competing in a shootout to determine the game's victor and the tournament's champion. Green River overcame Worland 4-2 in that shootout.

Despite having a rough start to their season, Green River has shown signs of life during the tournament. Making their way through the bracket, Green River defeated Riverton, Buffalo, and Lander to earn their spot in the championship round.

During a very cold and wet game Friday, Green River overcame Riverton in a 4-0 shutout, then defeated the squad from Buffalo 1-0. Lander would battle the Wolves to a 0-0 tie, which was decided in Green River's favor after a 4-3 shootout.

Head coach Chris Beiber said the team worked hard during the tournament, but still sees skills his players need to improve. He also said while the team face shootouts in the last two games, he wasn't very concerned about the situation.

"When you have one of the best goalkeepers in the state, you don't worry about it," he said.

The Wolves are playing at home again this weekend, taking on the two Natrona County teams. Green River will host Natrona County High School Friday at 6 p.m., and will take on Kelly Walsh Saturday at noon. Both games will take place at Wolves Stadium.