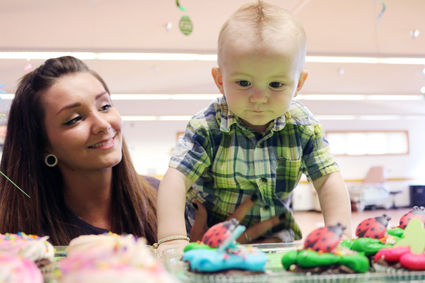 Mandalina Quilgey holds her son Xavier Nelson while he tries to decide which cupcake he wants to eat. He settled for a plain white frosted cupcake.

Easter decorations were placed throughout Castle Rock Rehabilitation Center to get residents and children alike in the mood for the Easter Carnival.

Children and their parents were bustling around the center Friday playing the games the center had to offer, buying raffles tickets for a chance to win a prize basket or making crafts.

One of the most popular games at the carnival, was the cake walk. Children were encouraged to walk around a circle until the music stopped. Once the music stopped, the children quickly hopped on a number closest to them hoping it would be the next number called....