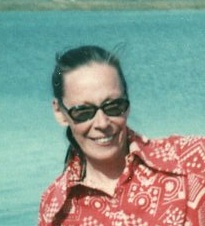 She attended schools in Pasadena, Calif., and was a 1952 graduate of the Pasadena High School. Woodward also attended fashion design school for one year.