Boys getting back in gear 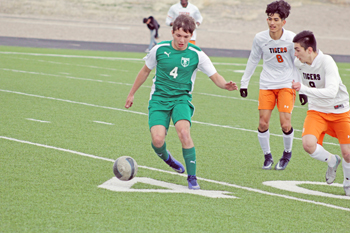 A 1-3 start to the season isn't what the boys soccer team was looking to start their season with, but they're powering ahead regardless and looking forward to the soccer season.

Following a defeat from Rock Springs Thursday and a 3-1 victory over Evanston, the team prepares to compete in the Southwest Invite in Green River.

With Evanston, head coach Chris Beiber said the team is starting to work together much better. The three scores the Wolves earned were from a hat trick performed by junior Hayden Counts. Regardless of the victory, Beiber said there's more work to be done.

The tournament starts April 6 and the Wolves take to the field against Riverton at noon on the Green River High School Field. The winner of that match will compete against the winner of the Buffalo-Cody match taking place at 1:30 p.m., at Wolves Stadium.

According to Athletics Director Tony Beardsley, the brackets were formed based on the rankings from Wyopreps.com. They also took into consideration which teams would already play each other during the season and the travel distance for the starting matches to ensure they could arrive on time for Friday's matches.

"We split teams up based on these three criteria as best we could," Beardsley said in an email.

Beiber has focused his early-season attention on working his players back into physical condition. However, Beiber said the team has been successful in working towards his expectations.

"They're all working hard," Beiber said. "A lot of boys know what we're expecting of them."

While Beiber has worked on improving his team's physical conditioning, he's also had to contend with the team playing without two of its more-experienced players. The Marchal brothers played their first soccer game against Evanston Tuesday afternoon, missing their first three games due to commitments with the GRHS Speech and Debate team.

The duo was unable to compete because they did hadn't attended the required number of practices needed to play.