Boys prepare to bounce back 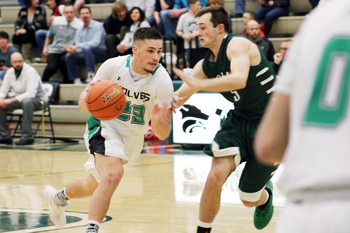 Devin Love continued to take the ball to the hoop throughout the first half of Saturday's basketball game against Kelly Walsh.

The boys basketball team are looking for rebound after a series of losses last week in their last home games of the season.

The Wolves were defeated by Natrona County and Kelly Walsh over the weekend, losing to Natrona, 64-61, Friday night and Kelly Walsh, 58-57, Saturday afternoon.

According to head coach Laurie Ivie, the team had periods where they were doing the right things offensively and defensively, but they were still inconsistent.

"In order to win games, we need to play four, solid quarters of basketball," Ivie said.

She said the two games were huge for the Wolves, both in terms of...